A new cryptic species of the genus Hoplobatrachus from Cox’s Bazar district of Bangladesh is described and compared with its relevant congeners both in morphology and mitochondrial gene sequences. Based on mtDNA data, this new species was proved to genetically divergent from H. tigerinus at 3.2% for the 16S rRNA gene and 14.2% for the Cytb gene. The known distribution range of the new species is restricted to southeastern corner of Bangladesh and it seems to endemic in this coastal belt. It is new to the genus Hoplobatrachus after 150 years later. 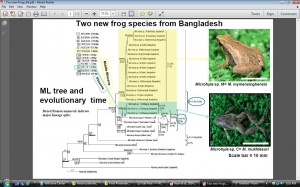 Two new frog species were recently described from Bangladesh. The first (M. mymensinghensis) and the second new species (M. mukhlesuri) seems to have separated from their closest relatives more than 3.4 Million and 10.5 Million years ago, respectively. Their ancestors supposed to have evolved somewhere in East and Southeast Asia. Please find the preview of the paper here