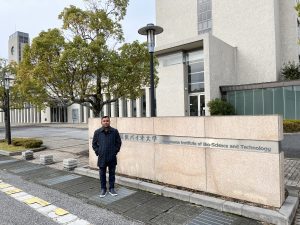 Recently, I have visited (12-17th November, 2022) Nagahama Institute of Bio-Science and Technology University, Shiga Prefecture, Japan. I presented  recent status and prospect of herpetology and ichthyology research in Bangladesh. A few collaborative research work plans have been shared and discussed with top level scientists in Japan. 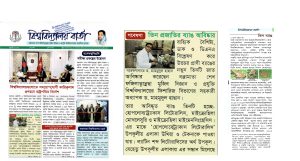 Our university (BSFMSTU) has planned to release magazines twice in  a year. In connecting this, recently the authority first time published the magazine and focused my achievement and research activities in its first page. This is a thrilling and happiness issue for me which really pursue me to devote more myself further in research work. Thanks to university authority.

To evaluate the degree of postmating isolation and the evolutionary relationships among frog species in the genus Fejervarya from Indonesia (Lesser Sunda), Bangladesh, China, and Japan, crossing experiments and molecular phylogenetic analyses were carried out. Crossing experiments revealed that reciprocal hybrids among F. iskandari, F. verruculosa, and F. sp. large type and between F. multistriata and F. kawamurai are viable through metamorphosis, while those between the F. iskandari group and F. limnocharis group were completely or partially inviable at the tadpole stage and those between Southeast Asian and South Asian Fejervarya groups were completely inviable at the embryonic stage. The mature reciprocal hybrids between F. iskandari and F. verruculosa from Lesser Sunda, Indonesia showed some degree of abnormality in spermatogenesis. In phylogenetic analyses based on mtDNA Cytb sequences, F. iskandari formed a sister clade with F. verruculosa from Lesser Sunda, Indonesia with 8.1% sequence divergence. F. multistriata from China formed a clade with populations of F. limnocharis in Thailand, Malaysia, and Indonesia (topotype) and these taxa showed sister relationships to F. kawamurai from Japan with 8.9% sequence divergence. Fejervarya sp. small type from Bangladesh formed a clade with the other South Asian members of the Fejervarya group and formed a sister clade with the Southeast Asian Fejervarya group, with 23.1% sequence divergence in the Cytb gene. These results showed that the degree of postmating isolation reflects molecular phylogenetic relationships and that F. iskandari and F. verruculosa from Indonesia (Lesser Sunda) are reproductively isolated by abnormalities in spermatogenesis and show genetic differentiation. 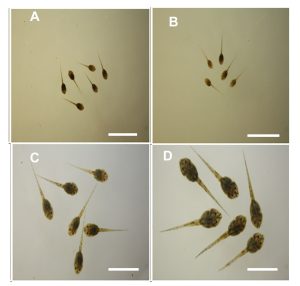 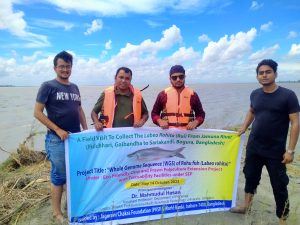 Figure: We are on the islands of the Jamuna River.

Recently, I along with my undergraduate students went to the Jamuna river for Rui fish collection. This was a terrible experience in the middle of the river. Because, the tide and wave was so strong that we were merely escaped from the danger. We finally achieved to catch two Rui fishes from the help of fishermen. Our target is to know the Whole Genome Sequence of Rui fish from the biggest river in Bangladesh like the Jamuna. This project was funded by Gagaroni Chakra Foundation, Jashore, Bangladesh. 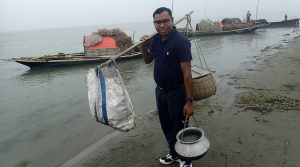 Figure: Trying to catch the fish as well as adapt with the targeted fishermen life style.

The Brahmaputra drainage system has been originated from the Manasarovar Lake region, near the Mount Kailash, located on the northern side of the Himalayas in Burang County of Tibet, China. Later it enters into Arunachal Pradesh, India and flows southwest through the Assam Valley as Brahmaputra. Then, it enters into Bangladesh through Kurigram district and divided into two parts near to Dewangonj (Northen part of Jamalpur district): 1) the Brahmaputra (also known as old Brahmaputra) and the Jamuna River. Warm water temperatures, plentiful rainfall, and nutritive silty clay-loam soil make the Brahmaputra drainage system is big resources for icthyofauna in Bangladesh. But many species are now under threat due to unsustainable fishing practices, invasive species, and habitat alteration and loss. In addition, anthropological activities pose thereat of the entire ecosystem in Bangladesh. Therefore, sustainable management of the aquatic resources of the region is urgently needed to conserve the icthyofauna. A prerequisite for this is a careful and accurate assessment of fish species to measure suitable conservation policy for the targeted species. 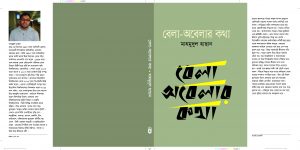 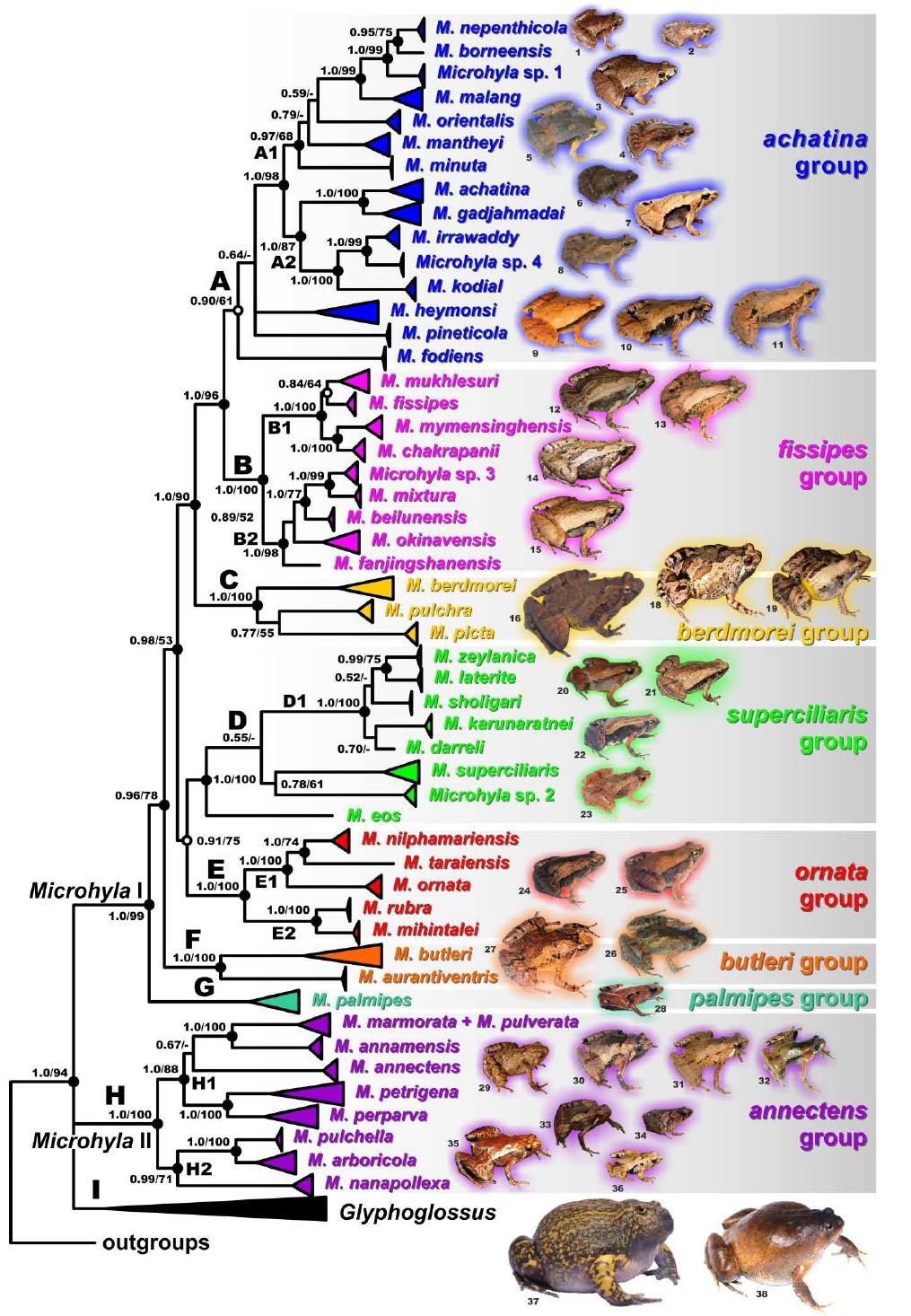 We provide an updated phylogenetic hypothesis for the genus Microhyla, or oriental tiny frogs. An exhaustive taxonomic sampling for this group is challenging due to the high number of narrow-ranged or point-endemic species across South and Southeast Asia. In the present study, we examine mtDNA and nuDNA markers for 48 of 50 recognized Microhyla species (96%), including 12 nominal species and several undescribed candidate species that have not been examined phylogenetically before our work, thus providing the most comprehensive taxonomic sampling for Microhyla to date.

I received small grant from the Ministry of Science and Technology, The People`s Republic of Bangladesh to analyze the cryptic species diversity of freshwater species in Bangladesh.

Stunning variation in terms of landforms and climatic zones supports an enormous variety of habitats, areas of endemism and plethora of biodiversity of Bangladesh. Freshwater fishes supports rural livelihoods here but many species are now under threat due to unsustainable fishing practices, invasive species, and habitat alteration and loss. In addition, anthropological activities pose thereat of the entire ecosystem in Bangladesh. Therefore, sustainable management of the aquatic resources of the region is urgently needed to conserve the icthyofauna. A prerequisite for this is a careful and accurate assessment of fish species to measure suitable conservation policy for the targeted species. 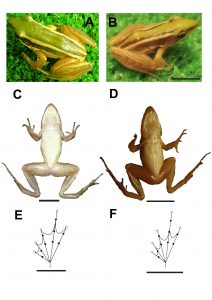 For more than a century, Hylarana tytleri (Theobald, 1868) has been confused with two congeneric species, H. taipehensis and H. erythraea, in Bangladesh and neighboring countries due to phenetic similarities as well as a lack of sufficient molecular and morphometric data. To resolve these problems, we conducted molecular and morphological surveys of Hylarana species throughout Bangladesh and examined H. taipehensis from Taiwan and Vietnam, H. erythraea from Vietnam, Thailand, Myanmar and Malaysia, and H. macrodactyla from China and Vietnam. This paper may be useful as a reference to avoid erroneous species identification of Hylarana species in these regions.